11.6 Did a lie detector test confirm the astronauts’ UFO sightings?

IN A NUTSHELL: No. Two of the astronauts were dead at the time of the alleged test.

However, the original source of this news report is a British tabloid, the Daily Star, which on 8 April published an article entitled ‘I saw a UFO’ Buzz Aldrin PASSES lie detector test revealing truth about aliens by Mike Parker (Figure 11.6-1). The article mentions an “Institute of BioAcoustic Biology” in Albany, Ohio, which reportedly performed “complex computer analyses of the astronauts’ voice patterns as they told of their close encounters”. According to the Daily Star, “Aldrin, Al Worden, Edgar Mitchell and Gordon Cooper all took part in the study”. 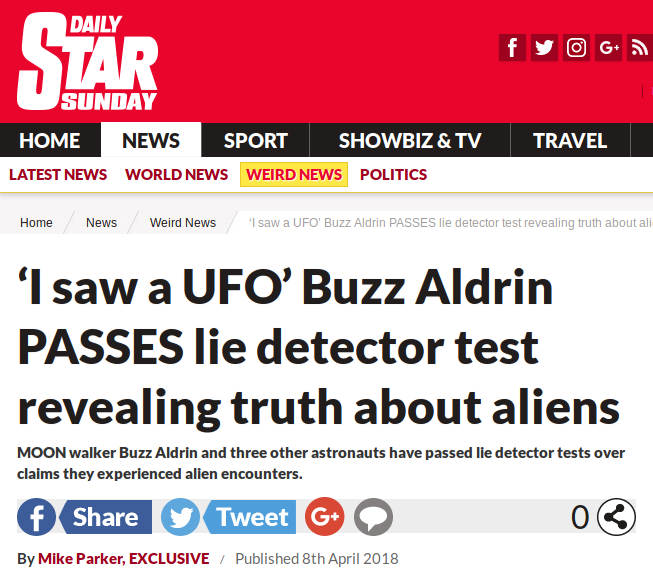 But there’s a problem with this story: two of the astronauts who allegedly “took part in the study” were dead at the time of the report. Ed Mitchell died in 2016 and Gordon Cooper died in 2004.

Careful reading of the article reveals that the “analyses” were not performed on the astronauts, as suggested initially, but merely used old recordings of their voices. This is in no way comparable to a lie detector test, which requires the subject to be present and measures several physiological parameters instead of merely analyzing the voice.

Incidentally, Cooper was involved in the Apollo program only as a backup crew member; he went to space twice with Mercury and Gemini flights, but never flew to the Moon.

Moreover, the Institute of BioAcoustic Biology has no scientific credibility: it is owned by a private individual who claims, without any evidence, that “the frequencies contained in the voice are holographic representations of your state of health and wellness”.

In any case, the alleged “analyses”, would be flawed due to two basic errors of method. The first one is that the Aldrin statement that was reportedly analyzed is his report that he saw an object during his journey to the Moon, but Aldrin has stated that the object was an Apollo spacecraft panel and not a UFO (as described in Section 11.2). The second one is that even assuming that these “analyses” had any scientific merit, they would merely indicate that the astronauts believed what they said and were not lying: they would not confirm that their words were factually correct.