11.1 Are there UFOs in Apollo photographs?

IN A NUTSHELL: No. The objects claimed to be UFOs are actually lens flares or spacecraft debris.


THE DETAILS: Some UFO enthusiasts claim that the photographs taken on the Moon by the astronauts show the presence of alien vehicles. For example, Ufocasebook.com includes, in the section entitled The Best UFO Pictures Ever Taken, three photographs of the Apollo 16 mission (Figure 11.1-1).

Figure 11.1-1. Alleged UFOs in Moon photographs according to Ufocasebook.com.


It’s worth noting that the people who present these photographs as evidence of a UFO-related conspiracy claim that they were really taken on the Moon and therefore implicitly contradict the other conspiracy theorists who deny the Moon landings.

The “UFOs” that can be seen in these photographs and in many other images from the Apollo missions are not flying saucers that NASA nonchalantly left in the pictures, hoping that nobody would notice them: they’re simply reflections of the Sun inside the camera lens. These reflections are known to photographers as lens flares and occur on Earth, too, although usually they are less noticeable because on Earth the sky is very bright when the Sun is up and therefore the flares fall onto a bright background. On the Moon, the sky is black even when the Sun is above the horizon, so any lens flare stands out starkly against the blackness.

It turns out that in the uncropped high-resolution original scans of these photographs, the “UFOs” are actually two in each image and are always aligned in the direction of the Sun, the position of which can be determined by tracing the directions in which the shadows converge. These are typical indications of a lens flare.

In the third photo, in particular, the lens flare would stand out unmistakably if someone hadn’t trimmed off the upper part of the picture, because the second “UFO” is actually in front of the sunshade on the astronaut’s helmet (Figure 11.1-2). 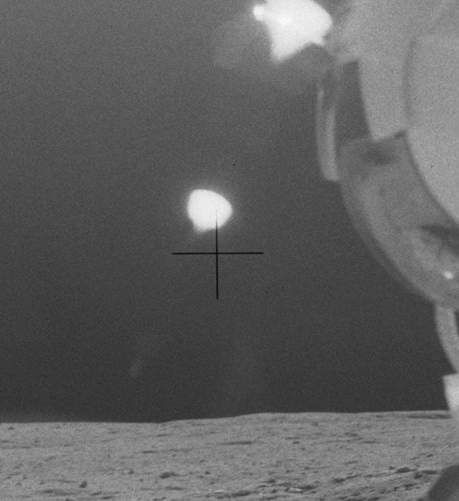 Figure 11.1-2. Detail of photo AS16-109-17804, including the part that is cropped in the version shown by Ufocasebook.com. Note the raised sunshade on the helmet and another “UFO” on the sunshade.


It’s rather hard to believe that the pictures were cropped so conveniently just by chance or that the vehicles used by aliens for their Moon trips are the size of horseflies.

The visual records of the Apollo flights include dozens of photographs affected by lens flares. In the color photos, such as the ones shown in Figure 11.1-3, the rainbow effect produced by the different refraction of the various colors inside the lens is an obvious giveaway that the alleged alien spacecraft is merely a byproduct of the camera lens and is not a real object. 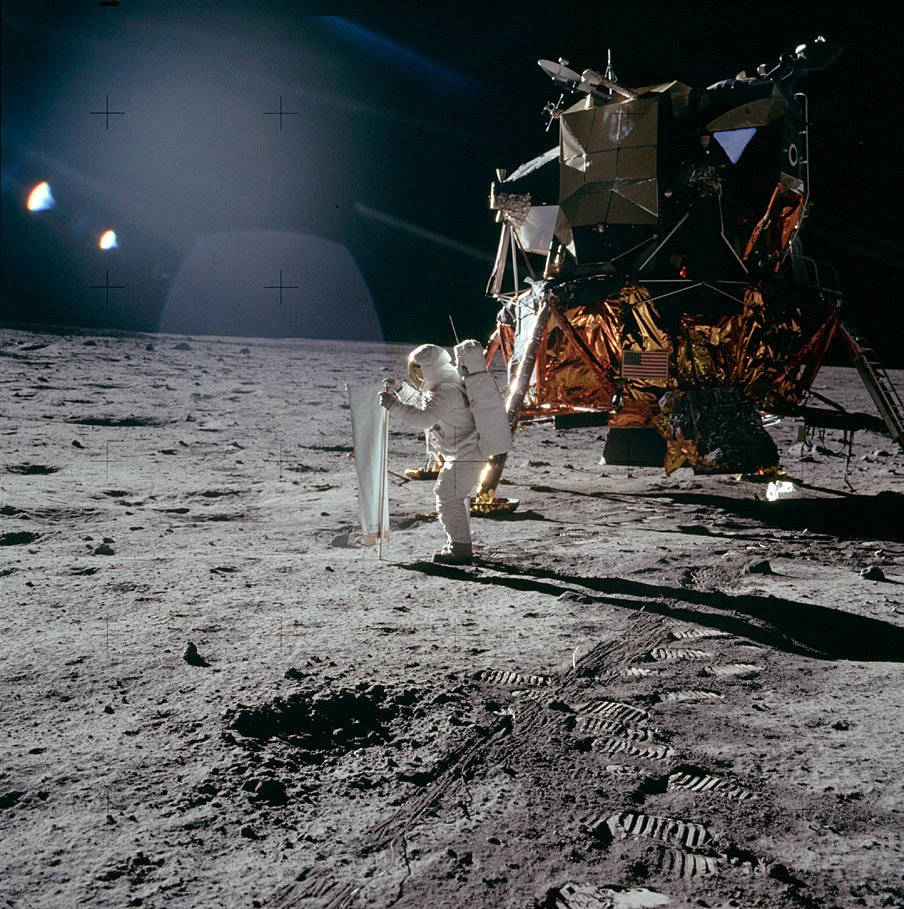 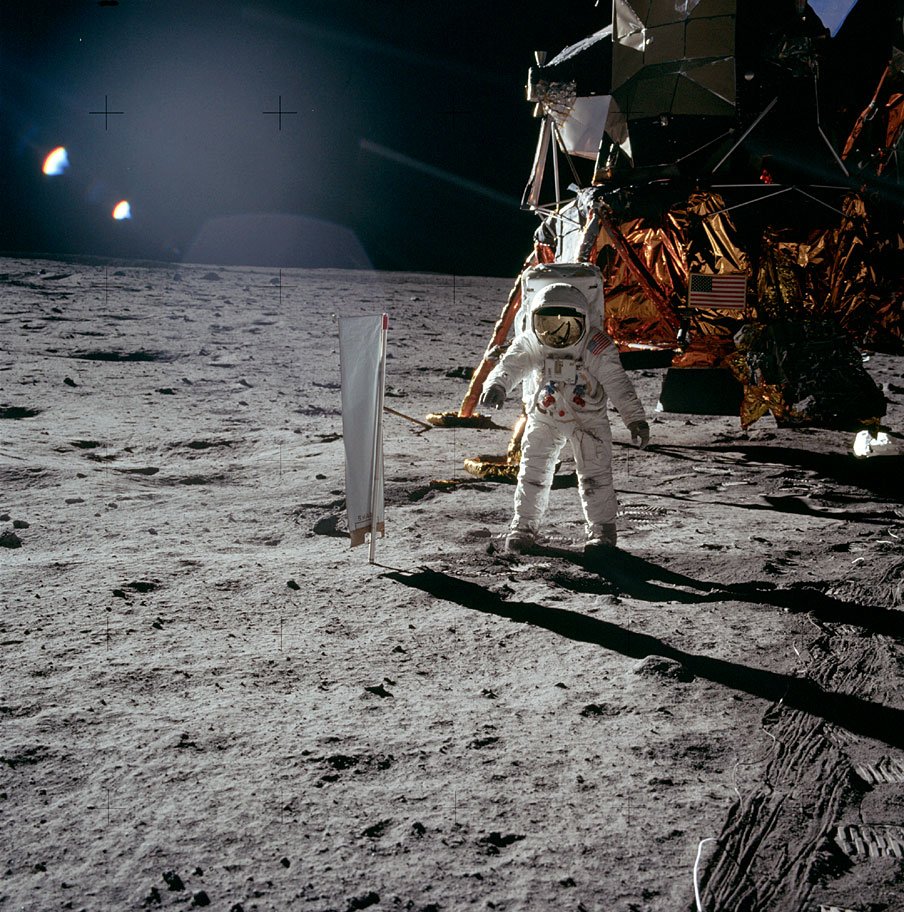 
However, not all the “UFOs” that can be spotted in the Apollo photographs are camera-generated. Some are real objects that are difficult to interpret correctly without knowing the technical context: for example, they are often parts of the spacecraft that were jettisoned after use or flakes of the vehicle’s covering that peeled off and traveled alongside it by inertia.

Fragment break-off was quite frequent. Figure 11.1-4 shows the S-IVB stage of Apollo 8 after its separation from the Command and Service Module: note the swarm of bright debris that surrounds the jettisoned stage. 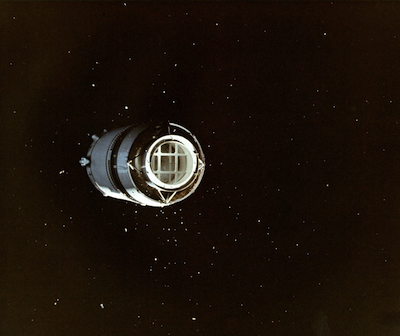 
Figure 11.1-5 instead shows a piece of Mylar covering that detached from the Apollo 10 Command Module and floated outside the spacecraft. Astronaut John Young estimated it to be about 50 centimeters (a foot and half) long. 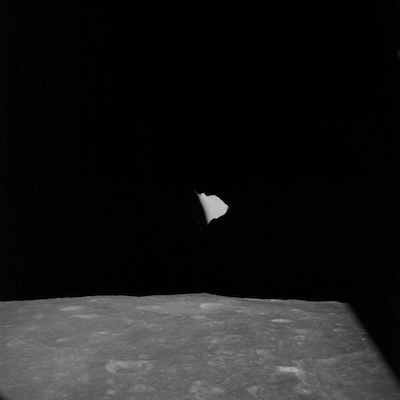 
Without knowledge of this context and with no distance references to estimate the size of the object, it’s easy to imagine the flake to be a mysterious alien vehicle. It is not surprising that this is one of the most frequently mentioned Apollo images among UFO enthusiasts. However, a more thorough perusal of the Apollo archives reveals at least two more photographs (AS10-28-3989 and 3990) of the same fragment as it slowly turns. If these photos are combined to create a stereo pair, they clearly show that the object is small and close to the viewer.